Great things are happening in zambia 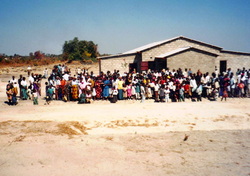 Grace Baptist church of Twashuka was the first church we planted in Zambia in 1998.  We started the work in January 1997.  The church first met in a rented school room at the local basic school.  We quickly outgrew the small room and the Lord supplied the need to  build a building for Grace Baptist Church in 1998.  Our pastor, Rev. Frank Wood, came to Zambia in November 1998 to organized the work into a local independent baptist church.  Grace Baptist Church has been a lighthouse for the Gospel for many years.  Edward Yengwe is the pastor and the church is self-governing, self-supporting and totally independent from our mission work in Zambia. 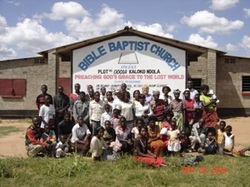 Bible Baptist Church was the second church we planted in Zambia in 2002.  A small Bible study was established in Kaloko by pastor Musonda Kilosha.  Pastor Musonda's church was six miles from Kaloko.  He was riding his bicycle every Sunday afternoon the six miles to Kaloko to meet with the Bible study.  When we moved to Ndola from Luanshya in August 200o Musonda asked if we would take over the work in Kaloko.  The work was meeting under a tree at one of the member's house.  Soul winning and Bible study quickly grew the work and again we rented a room at the local primary school.  The Lord supplied the need and we built a building for the work in 2002.  The work was organized into Bible Baptist Church in 2002 as well.  Victor Bwalya is the pastor at Bible Baptist Church and it is also totally independent of our mission work in Zambia. 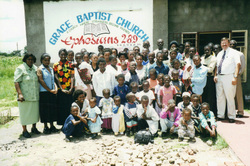 Grace Baptist Church was our third church planted in Zambia in 2003.  Webby Bwalya graduated from Baptist Bible College in Luanshya in 2000.  He ask me if I would work with him to start a new church in Ndola.  He moved to Ndeke Compound in Ndola and a Bible study was stared in his home in September 2000.  After outgrowing his house we rented a store front for the work to meet in.  The Lord provided the need and we purchased a uncompleted building in Ndeke to covert into a church building.  The building was completed and remodeled for the church to meet it.  The work was organized into Grace Baptist Church in 2003. 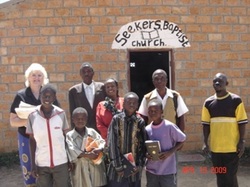 Handson Jere moved to the village of Mukolwe in 2002 to work for a farmer.  He was attending our Bible Institute and told me he could not find a church to attend.  I advised him to start one.  He started meeting under a tree at his house.  Within a few months the work grew and they were asking for a building.  After meeting with Senior Chief Mushili of the Lamba people, he gave us some property in the village to build a building.  The Lord supplied the need for a building and the work was organized into Seekers Baptist Church in 2004. 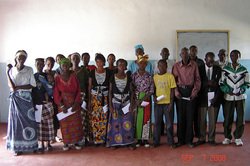 Some people that attended Grace Baptist Church of Twashuka Compound in Luanshya were walking several Kilometers to church from Buntungwa.  Some of the men in leadership decided to start a Bible study with the intention of starting a new church.  The work grew over the course of several month and I rented a store front for the work to meet in.  The Lord supplied the need and I bought a dilapidated building, installed a new roof and remodeled the building for the work to meet it.  Cornerstone Baptist Church was organized into a church in 2006.  Baldwin Zulu, who graduated from our Bible Institute in 2003 is the pastor of Cornerstone Baptist Church. 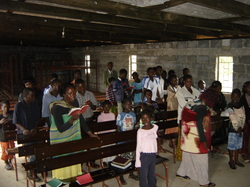 Thompson Mwewa graduated from our Bible Institute in 2006.  He moved to our youth camp property in 2007 to be the caretaker at the property.  There was not a church in the area to attend so he started a Bible study in one of the dorm rooms at the youth camp.  Within a few months  the work was running in the 40's in attendance.  The work was organized in 2010 into Twikatane Baptist Church.
Powered by